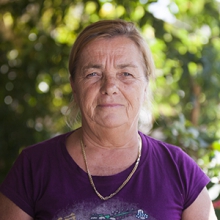 Now aged 64, Jacqueline Koutivas has had 20-years of experience living with the devastating effects of osteoporosis and related fractures. Petite to begin with, she has now lost 8 cm in height. Painful arm and leg fractures have been the cause of significant pain and disability. Jacqueline, who lives in Athens, has chosen to share her story in the hope that other women will be inspired to take action for prevention through early diagnosis.

Jacqueline’s story begins when she was just 44 years old and had early-menopause related surgery. Six months later she was diagnosed with post-menopausal osteoporosis.

Now, I’m still osteoporotic and I was on medication until recently. Two years ago I stopped taking it as my doctor here in Greece said I no longer needed it. Now I’m really in trouble. I broke my right arm four months ago but it refuses to heal. So now I’m back on osteoporosis medication again to see if it will help.

Over the past twenty years Jacqueline has suffered two leg fractures and a broken arm. She found that the impact of the arm fracture on her life was far worse than the leg fractures. It changed her everyday life, forcing her to learn to do everything with her left hand, and she now experiences constant pain in the arm as well as in the legs and spine.

She explained: "I can’t even peel a potato, little things like that, because it hurts all over my arm. I can’t hold a knife in my hand for example. But I’ve gotten the hang of it. I’ve learned to deal with it. After four months, I had to learn to do things with my left hand. My grandson is more careful around me and he helps me a lot!"

Jacqueline is especially careful when walking outdoors in the city streets of Athens and encourages others to be careful too. "You have to be careful because the streets and the sidewalks aren’t the best. There are potholes everywhere. If you’re not paying attention, you can fall. That’s how I fell one of the times that I broke my leg. I tripped on the pavement downtown", she says.

Jacqueline wisely joined the local patients association about 10 years ago. This helps her keep informed and up to date with the latest information on osteoporosis. She also has a bone check-up every two years to keep track of her bone health status. When she warns people of the impact of osteoporosis, Jacqueline is surprised that many people don’t understand just how bad osteoporotic-related fractures can be.

When I tell people about osteoporosis they don’t always believe it’s so bad. I tell my sister-in-law all the time that she should go see her doctor and talk to him/her about it, and that she should be careful. But she says “Oh no, it’s no problem; I would rather not know.” That’s not normal, at least I don’t think so. I know that we should go regularly because after 50 years of age, one should be careful. I mean, we’re not 20 years old anymore! You have to be careful not to fall because at a certain age bones don’t heal easily. If you break one, then you’re in trouble like me.